The following offers a brief history of St. John Catholic Center. Today, there are seven buildings on the campus, which together house the offices of the Diocese of Little Rock, Catholic Charities of Arkansas, Christopher Homes of Arkansas and St. John Manor, a retirement home for diocesan priests. To learn about a specific building, click on the name of the building below. Also available is a history of the diocese and biographies on our former bishops. For more information, Contact Us.

Bishop John B. Morris opened a Catholic college in downtown Little Rock in the former Arkansas Military Academy building in 1908. Little Rock College was later joined by the addition of St. John Seminary in 1911. When the college and seminary could no longer accommodate their increasing enrollment, Bishop Morris looked west to an undeveloped area of Little Rock called Pulaski Heights. It was seven miles from downtown and nearly two miles from the nearest street car. The land was located on top of a granite "shelf." Just imagine 40 acres of "complete wilderness of pine, hickory and oak." 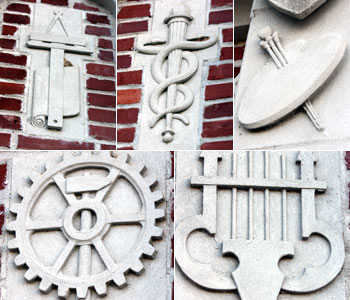 Three buildings were built in 1916 and named after the diocese's first three bishops, Andrew Byrne, Edward Fitzgerald and John Morris. Shortly after the location on North Tyler Street opened, enrollment continued to increase and the seminary moved back downtown. In 1922 the seminary was chosen to be the "home missions" seminary for the country.

The college prospered in the 1920s, offering bachelor's degrees and pharmacy training and eventually began to accept women into classes in 1928. With the stock market crash and Great Depression, Little Rock College closed in 1930. The college's short history is still remembered with the school crest on the front of Morris Hall and academic symbols on the front of Fitzgerald Hall. 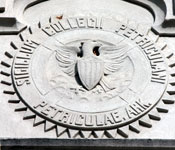 The seminarians moved back to the Heights location, and Catholic High School for Boys opened in the downtown location. The seminary thrived for decades, but in 1967 the diocese could no longer justify keeping the seminary open for its small number of students. Bishop Albert L. Fletcher found a new use for the buildings though. In 1968 he added a chancery building (now called The McDonald Center) and moved the diocesan offices to the campus, which was renamed St. John Center. Small groups of clergy, religious and the laity began using the former classrooms and dorm rooms for training and retreats. With minor modifications the diocesan staff made do with the buildings and their outdated wiring, heating and inefficient use of space.

Not only was St. John Seminary named after its founding bishop, but the main focus of the campus was named in his honor. Bishop Morris' coat of arms (right) is engraved in stone on the front of the building. Visitors to Morris Hall are greeted by a seven-foot statue of St. John the Baptist, which was donated in memory of Thomas Lafferty in 1943. Morris Hall was also used for classrooms and dorm rooms for upperclassmen. 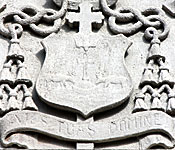 As the last building to be renovated, it was decided that the building could be renovated to use the space more efficiently. In 2000, the renovations were completed and most of the diocesan offices were moved into Morris Hall. Now visitors are greeted inside the doors by a marble column listing the parishes and missions that were open in 2000, the jubilee year. Inlaid in the floor is the diocesan coat of arms in terrazzo. On the third floor is a eucharistic chapel dedicated to the family of Bishop Andrew J. McDonald. He donated the statues and drawing of the McDonald family by Conway artist Eleanor Sullivan. 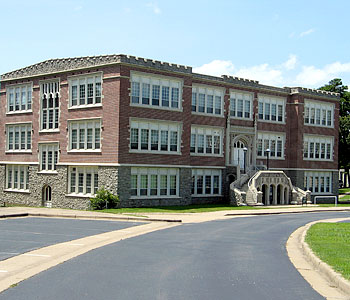 Fitzgerald Hall was home to classrooms and dorm rooms for the younger students. It was predominantly used for science classes and labs. Bishop Fitzgerald's coat of arms is still visible on the exterior. (left) When the seminary closed, groups met in the former classrooms. In the 1980s the building needed major repairs and was no longer used. Vandals destroyed the inside, and the diocese worried about the state of Fitzgerald Hall.

One of the most important goals of the campus master plan was to find a home for the retired diocesan priests. In 1991 the second and third floors were turned into a chapel and 10 apartments were added for the aging priests. It is known as St. John Manor. 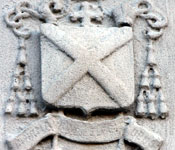 Another goal was increasing space for meetings and retreats. The first floor and basement, which was once the recreation room and showers, were renovated into meeting rooms and a kitchen. The conference center today is a popular place for businesses and groups to hold their meetings, and on 48 weekends a year the building is the site of retreats and classes. 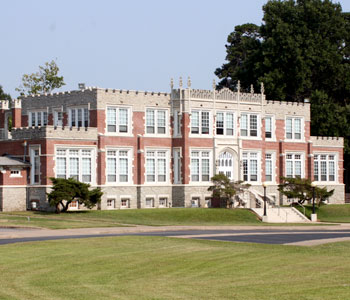 Once the refectory for the seminarians, Byrne Hall (left) has the distinction of being the only building with gargoyles (right) on the outside. The Benedictine sisters from Holy Angels Convent in Jonesboro could always be found in the kitchen preparing meals, and they lived in quarters on the second floor. 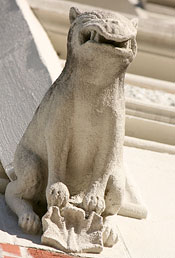 In the basement, seminarians used to monitor New Madrid fault seismic readings for St. Louis University. The building continued to be used as a dining hall, which was graced by two hand-carved sideboards, until 1995.

After renovations, the building was leased to the Arkansas Symphony Orchestra and Christopher Homes of Arkansas, a diocesan housing ministry for the elderly and handicapped. 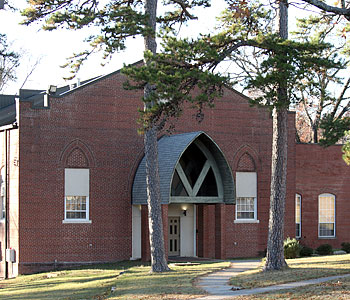 The Dining Hall (right) is used often when groups stay for daylong or weekend meetings, but it was originally built as a gymnasium. The building had different uses through the years. It was often used as a chapel until 1951 when Morris Hall Chapel was built.

Later, a parish used the building as a daycare. In 1995, the building was renovated and a kitchen and small dining room were added. The two sideboards from Byrne Hall were refurbished and moved into the repurposed Dining Hall. 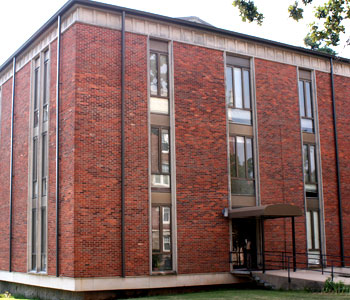 Fletcher Hall (left) was built in 1965 as a dormitory. It was named in honor of Bishop Fletcher, who was bishop at the time. In 1991, it was modernized and each room was renovated to include a private bathroom. New lighting and carpeting were added in 2011.

The building contains 14 double rooms, 39 triple rooms and seven suites. While Morris Hall was renovated from 1998 to 2000, diocesan employees turned the dorm rooms into their offices. From 2000 to 2010, Catholic Charities of Arkansas employees used the building for their offices. See retreat centers. 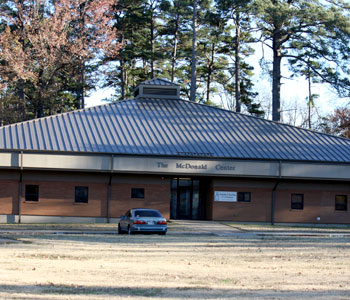