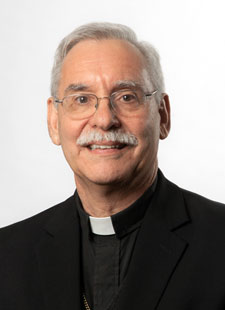 Bishop Taylor was ordained and installed as bishop for the Diocese of Little Rock on June 5, 2008. His episcopal motto is: "The Humble Shall Inherit the Earth." For more information, go to Office of the Bishop.

Bishop Anthony Basil Taylor was born April 24, 1954, in Fort Worth, Texas. His parents and grandparents on both sides were long-time residents of Fort Worth. Two of his grandparents are converts (his mother's father from Judaism and his father's mother from Protestantism) and both of his parents, as well as the Taylor children themselves, were raised in a Catholic home.

Bishop Taylor is the oldest of the seven children of the late Basil and Rachel (Roth) Taylor — the five Taylor boys and two Taylor girls were born in a little over nine years and are as close personally as they are in age. The Taylor family moved to Ponca City, Okla., in 1960, where Bishop Taylor's parents and two of his siblings and their families still live today — the other four live in Texas. Ponca City is on the Arkansas River in northern Oklahoma.

Bishop Taylor attended parochial and public schools, graduating from Ponca City High School in 1972. He attended the University of Oklahoma for two years, after which he was accepted as a seminarian for the Archdiocese of Oklahoma City. He attended St. Meinrad Seminary College in Indiana for two years, graduating with a bachelor's degree in history. From 1976-1980 he attended the North American College in Rome, taking classes at the Gregorian University, and was ordained a priest at St. Mary Parish in Ponca City, his home parish, on Aug. 2, 1980.

Hispanic ministry has been a major feature of Bishop Taylor's ministry from the beginning. His first assignment was to Sacred Heart Parish in Oklahoma City, and within a month of ordination he had begun to celebrate Mass in Spanish twice a month in Clinton and Hinton, Okla. In 1982 he was transferred to western Oklahoma, where he lived at Queen of All Saints mission in Sayre until 1986 and served the Hispanic population in a five-county area, including ongoing ministry in Clinton and Hinton.

In 1984 then-Archbishop Salatka decided to send Father Taylor to Fordham University in New York for further studies in biblical theology. He took classes there during the summers of 1984 and 1985, and then full time from 1986 to 1988. During this time he served Holy Rosary Parish in the Bronx. Fordham University awarded Father Taylor a doctorate in 1989. The title of his dissertation was "The Master-Servant Type Scene in the Parables of Jesus."

Upon his return to Oklahoma, Father Taylor was named the vicar for ministries of the archdiocese. He was responsible for ministry to priests and, for a number of years, was also responsible for the permanent diaconate program. He had specific responsibility for the orientation and oversight of the international priests serving in Oklahoma, for the newly ordained in their first year of ministry and new pastors in their first year as pastors. He remained the vicar for ministries for 20 years, until being named bishop of Little Rock.

In 1993 Father Taylor also became the founding pastor of St. Monica parish in Edmond, which is a total stewardship parish. During his 10 years at St. Monica, the parish grew rapidly and dedicated a large church in 2000. In 2003 Father Taylor returned to Sacred Heart Parish in Oklahoma City as pastor and has overseen the last phase of its transition from predominately Anglo to predominately Hispanic. In 2008, the parish was 95 percent Hispanic and had nine Masses on the weekend, seven in Spanish, one bilingual and one in English.

From 1963-2001 the Archdiocese of Oklahoma City sponsored and staffed the parish of Santiago Atitlán, Guatemala, and in 1981 Oklahoma priest Blessed Father Stanley Rother was martyred there, as were many of his catechists and parishioners during the 1980s. In 2001 the parish was returned to the care of the local diocese of Sololá, but the Catholics of Oklahoma continue to be involved in providing assistance to that parish.

The cause of canonization of Blessed Rother was opened formally in September 2007 with Father Taylor heading up the effort as the episcopal delegate for the process. He has interviewed many of the still-living witnesses to Blessed Rother's martyrdom and/or heroic virtue.

Pope Benedict XVI named Bishop Taylor, then Father Taylor, the seventh bishop of the Diocese of Little Rock on April 10, 2008. Father Taylor was ordained and installed as bishop at the Statehouse Convention Center in Little Rock on June 5, 2008. Archbishop Eusebius J. Beltran of Oklahoma City was principal consecrator. Bishops J. Peter Sartain of Joliet, Ill. and Edward Slattery of Tulsa, Okla. were co-consecrators.

Bishop Taylor wore the episcopal ring of the diocese's first bishop, Andrew J. Byrne and carried the crozier of the fourth bishop, Albert L. Fletcher. For everyday use he wears a ring that once belonged to his grandfather, Basil C. Taylor, who was a faithful Catholic his entire life and he uses various other croziers which belong to him personally when celebrating Mass outside the Cathedral of St. Andrew in Little Rock.

His episcopal motto is "The Humble Shall Inherit the Earth." It is taken from Psalm 37:11 and is quoted by Jesus in the Beatitudes in Matthew 5:5. Bishop Taylor explained that the humble in his motto should be understood in the sense of the underlying Hebrew word Anawim. In English, humble and meek describe a person's attitude, but the Hebrew refers also to humble circumstances, being marginalized by external factors of poverty and bigotry.

To learn more, see his statements and letters, homilies or pastoral letter: "I Was a Stranger and You Welcomed Me: A Pastoral Letter on the Human Rights of Immigrants."