Prioritize Advent over the holiday season

In most parishes it is customary for parish organizations and ministry groups to have a party during the month of December as Christmas approaches. For many years it has been my custom, upon arriving at such a party, to make a light-hearted, humorous show of announcing that as far as I am concerned, I am not attending a "Christmas" party. In the Church's liturgical calendar, the Christmas season does not begin until Christmas Eve. We are in the liturgical season of Advent.

This usually leads to some banter about how we could respect the Church's calendar by calling our party an Advent party. This might be followed by the exchange of greetings such as "Merry Advent" and "Have a happy and blessed Advent". Finally I try to get the partygoers to agree that what we are truly celebrating is not Christmas, but the modern holiday season that extends from Thanksgiving until Christmas. 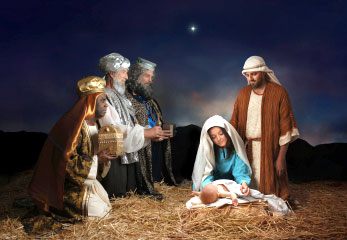 This holiday season with its emphasis on shopping, decorating and parties has come to dominate the month of December. It is easy to get caught up in the frenzy of the season. We are surrounded by holiday decorations before we are done with Halloween. Christmas songs flow from radio, television and the shops at the mall. Parties and gift-giving fill the month.

In the midst of all this frantic activity we are called to honor the season of Advent, which includes the four Sundays preceding Christmas and the weekdays in between. This year Advent begins on Sunday, Dec. 1. As the days grow shorter and the darkness of night increases, we are invited to pause and prepare ourselves to celebrate the anniversary of Our Lord's first coming to us as an infant in Bethlehem: To ponder the mystery of the incarnation when the Son of God humbled himself and took on our humanness.

We are also invited to look forward to his second coming when he will return in glory bringing the fullness of the kingdom of God; the kingdom he established through his life, death, resurrection and the gift of the Holy Spirit. Jesus, the light of the world, has come and will come again at the end of time. How can we balance the loud and urgent demands of the holiday season with the quiet and inviting demands of the Advent Season?

We can begin by committing ourselves to paying special attention to the Scripture readings that are assigned to each Sunday. As we hear in the first readings the stories of how God's people longed for his promised Messiah we can place ourselves in their shoes and look deeply within ourselves to discover our deepest longings and desires, those which only the promise of Jesus can fulfill.

As we hear Jesus promise us in the Gospel readings that he will return again, we can be led to more thoughtfully pray the words, "He will come again in glory to judge the living and the dead." We can go a step further and commit to reflect on the Scripture readings that are assigned to each weekday during Advent. They expand the themes that are offered each Sunday. The passages assigned for Dec. 17 to 24, the final days of Advent, are notably rich and beautiful. Prayerfully reading them each day can become a mini-retreat in preparation for the feast of Christmas.

The holiday season is relentless. It will not be easy to keep it from grabbing our time and energy. But God's pursuit of us is also relentless. He is always with us. A journey through Advent, listening to his word, praying with Scripture each day, even if but for a few minutes, will deepen our awareness of his presence and bring peace and grace as we await the promise of Christmas.

This article was originally published in Arkansas Catholic November 16, 2013. Copyright Diocese of Little Rock. All rights reserved. This article may be copied or redistributed with acknowledgement and permission of the publisher.