This year, Holy Saturday is celebrated April 16. Known as the "mother of all vigils," the Easter Vigil Mass takes place after sundown. Many people will join the Catholic Church during this Mass in parishes across Arkansas. Bishop Anthony B. Taylor will celebrate the Easter Vigil Mass at 8 p.m. at the Cathedral of St. Andrew in Little Rock. All are welcome. To find a Holy Saturday Mass time in your area, click on the link above. Special adoration times and Easter basket blessings are also planned. Confirm the schedule with the parish you wish to attend for any last-minute changes. If not listed, please visit our Parish Directory to find contact information for a parish near you.

"Are you unaware that we who were baptized into Christ Jesus were baptized into his death? We were indeed buried with him through baptism into death, so that, just as Christ was raised from the dead by the glory of the Father, we too might live in newness of life." — Romans 6:3-4

While Christ is in the tomb on Holy Saturday, he did something very important that often gets lost in the celebration of the Easter Vigil that evening. In the Apostles Creed we pray: "He descended into hell." Hell in this sense has a very different meaning than how we understand the term today.

The Catechism of the Catholic Church explains: "Scripture calls the abode of the dead, to which the dead Christ went down, 'hell' — 'Sheol' in Hebrew or 'Hades' in Greek — because those who are there are deprived of the vision of God." At this point in time, all those who had died were in this place because before Jesus' death and resurrection going to heaven was not possible, even for the righteous souls, such as the Old Testament patriarchs. 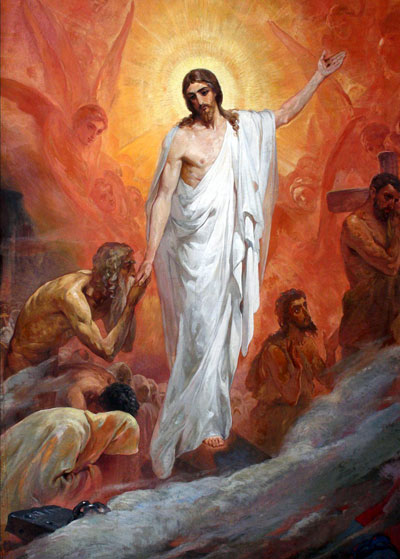 "Jesus did not descend into hell to deliver the damned, nor to destroy the hell of damnation, but to free the just who had gone before him. ... This is the last phase of Jesus' messianic mission, a phase which is condensed in time but vast in its real significance: the spread of Christ's redemptive work to all men of all times and all places, for all who are saved have been made sharers in the redemption." (catechism, no. 633-634)

"Today a great silence reigns on earth, a great silence and a great stillness. A great silence because the King is asleep. The earth trembled and is still because God has fallen asleep in the flesh and he has raised up all who have slept ever since the world began ... He has gone to search for Adam, our first father, as for a lost sheep. Greatly desiring to visit those who live in darkness and in the shadow of death, he has gone to free from sorrow Adam in his bonds and Eve, captive with him — He who is both their God and the son of Eve ... 'I am your God, who for your sake have become your son ... I order you, O sleeper, to awake. I did not create you to be a prisoner in hell. Rise from the dead, for I am the life of the dead.'" (Ancient Holy Saturday homily)

The early Church observed Holy Saturday by continuing the Good Friday fast in preparation for Easter. "After sundown Christians would hold an all-night vigil, which concluded with baptism and Eucharist at the break of dawn. The same idea (if not the identical timeline) is found in the Easter Vigil today, which is the high point of the Easter Triduum and is filled with an abundance of readings, symbols, ceremony and sacraments," according to Carl E. Olson of Our Sunday Visitor.

Known as the "mother of all vigils," the Easter Vigil Mass takes places after sundown and before daybreak, thus beginning and ending in darkness. "On this holy night, the Church keeps watch, celebrating the resurrection of Christ in the sacraments and awaiting his return in glory. It is the turning point of the triduum, the Passover of the new covenant, which marks Christ's passage from death to life." 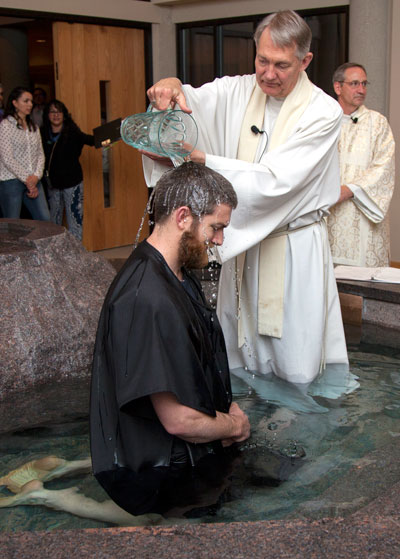 The biblical themes of light removing darkness and life overcoming death runs through the entire Mass, which consists of four main parts: the Service of Light, the Liturgy of the Word, Liturgy of Baptism and Liturgy of the Eucharist. Our salvation history is proclaimed during the Liturgy of the Word, revealing a God who has always been with us culminating in his resurrection from the dead and ultimate victory over sin and death. We then ring the bells and sing the Gloria and alleluia for the first time since Lent began.

The Mass then transitions into the baptism of those being initiated into the Catholic Church to show the connection between Christ's resurrection and ours. It is a practice that goes back to the early Church and later renewed through the Rite of Christian Initiation of Adults (RCIA) process after the Second Vatican Council.

Many people will join the Catholic Church by receiving the sacraments of baptism, confirmation and Eucharist during Easter Vigil Masses in parishes across Arkansas. Read about these new Catholics in Arkansas Catholic.

Did you get your new Easter outfit yet? "From the time of the early Christians, the newly baptized wore white garments made from new linen. In medieval times, it became a tradition for people to wear new clothes on Easter Sunday, symbolizing the 'new life' that comes with the resurrection. In some places it was believed that bad luck would come to those who could afford new Easter clothes but refused to buy them." To learn more, read this reflection on the Exsultet (Service of Light) or explore "10 Things You Probably Didn't Know About the Easter Vigil."