"Laudato Si' ("On Care for Our Common Home") — papal encyclical

"Evangelii Gaudium" ("The Joy of the Gospel") — apostolic exhortation 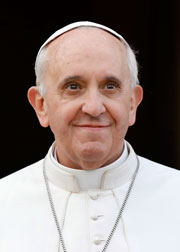 266th Pope of the Catholic Church

Cardinal Jorge Mario Bergoglio, 76, of Buenos Aires, Argentina was elected the 266th pope of the Catholic Church on March 13, 2013. He took the name Pope Francis. While addressing the people in St. Peter's Square after his election, he said:

"And now let us begin this journey, the bishop and the people, this journey of the Church of Rome, which presides in charity over all the churches, a journey of brotherhood in love, of mutual trust. Let us always pray for one another. Let us pray for the whole world that there might be a great sense of brotherhood."

The following links are the official sources for the Vatican and Pope Francis on the Internet.

Vatican.va — the official website of the Holy See and is where you can find the full text of all speeches, homilies and apostolic documents by the pope

Vatican News —  is the new information system of the Holy See

YouTube — Get your information about Pope Francis’ main activities and important Vatican events from the Vatican News Channel.

The Pope App — the official app for smartphones dedicated to the Pope (Copyright News.va)

These are also good sources for accurate information about the Vatican, Holy Father and Catholic Church.

Bishop Anthony B. Taylor — Bishop Taylor posts his homilies and statements on this Facebook page.

"Laudato Si' ("On Care for Our Common Home") — papal encyclical

"Evangelii Gaudium" ("The Joy of the Gospel") — apostolic exhortation