Marian feast reminds us to focus on eternal

The solemnity of the Assumption of the Blessed Virgin Mary is celebrated Aug. 15. This feast recognizes that Jesus' mother was "taken up body and soul into heavenly glory" when her "earthly life was finished." (Catechism of the Catholic Church, no. 966) This feast is a holy day of obligation to attend Mass. Visit our Parish Directory to find holy day Mass times in your area. 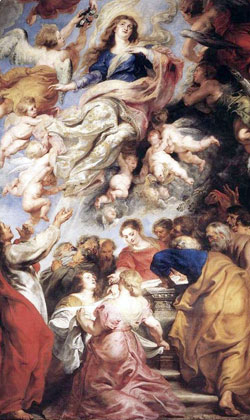 "The definition of the dogma, in conformity with the universal faith of the people of God, definitively excludes every doubt and calls for the express assent of all Christians," St. John Paul II said during his general audience at the Vatican on July 2, 1997. The National Catholic Register also offers references to this teaching in both the Old and New Testaments.

So, why does the assumption of Mary matter?

"By contemplating Mary in heavenly glory, we understand that the earth is not the definitive homeland for us either, and that if we live with our gaze fixed on eternal goods we will one day share in this same glory and the earth will become more beautiful," Pope Benedict explained in his general audience on Aug. 16, 2006.

"Consequently, we must not lose our serenity and peace even amid the thousands of daily difficulties. The luminous sign of Our Lady taken up into heaven shines out even more brightly when sad shadows of suffering and violence seem to loom on the horizon."

By contemplating Mary in heavenly glory, we understand that the earth is not the definitive homeland for us either, and that if we live with our gaze fixed on eternal goods we will one day share in this same glory and the earth will become more beautiful.

In his apostolic constitution, "Munificentissimus Deus," Pope Pius XII explains the effects of original sin, and how Mary, who was preserved from original sin and remained sinless throughout her life, experienced immediately the hope of all faithful followers of Jesus.

"Christ overcame sin and death by his own death, and one who through baptism has been born again in a supernatural way has conquered sin and death through the same Christ. Yet, according to the general rule, God does not will to grant to the just the full effect of the victory over death until the end of time has come. And so it is that the bodies of even the just are corrupted after death, and only on the last day will they be joined, each to its own glorious soul.

For Your Marriage, an initiative of the United States Conference of Catholic Bishops, summed up the joy Mary's assumption holds for us. "Her entry into heaven prefigures our own hope of experiencing the same eternal life." This event reveals not only the love God has for his children, but also the realization of what he intended before death entered the world. Mary was able to "experience the immediate perfect union with her Son in heaven, never knowing, tasting or suffering from bodily corruption or decay (due to death) in any way," explains Mark Hart, of Life Teen International.

"O immaculate virgin, mother of God and mother of men, — we believe with all the fervor of our faith in your triumphal assumption, both in body and soul, into heaven where you are acclaimed as queen of all the choirs of angels and all the legions of the saints; and we unite with them to praise and bless the Lord who has exalted you above all other pure creatures, and to offer you the tribute of our devotion and our love."