Catholic Charities of Arkansas raised $38,000 to support its programs through the Bishop McDonald-Catholic Charities Golf Classic Oct. 7. It was held at Maumelle Country Club with 27, four-person teams that included three priests and two deacons. Sacred Heart of Jesus Church in Hot Springs Village had the most parish teams with six plus the parish’s Knights of Columbus Council 10208 entered two teams. The Arkansas State Council Knights of Columbus and CHI St. Vincent each entered three teams. 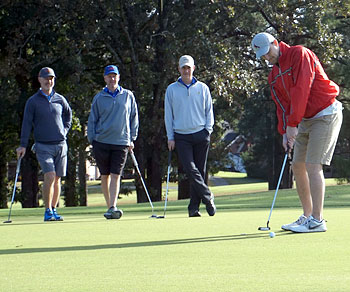 The following teams won in these categories:

This was the 25th year of the golf tournament, which is the primary fundraiser for the ministries and programs of Catholic Charities of Arkansas. These include: adoptions, immigration and refugee resettlement services, free medical care and assistance for the poor, natural disaster response, legislative advocacy and resources to assist in parish outreach and social justice. Several organizations and individuals also sponsored the tournament, including CHI St. Vincent as the underwriter. To learn more, read Arkansas Catholic or contact Megan Moore at (501) 664-0340, ext. 379

This event was named after the late Bishop Andrew J. McDonald who served as shepherd for the Diocese of Little Rock from 1972 to 2000. It was during his tenure that Catholic Charities of Arkansas was established. The McDonald Center, which is home to the offices of Catholic Charities, is also named in his honor.