This year, the Solemnity of the Most Holy Trinity is celebrated Sunday, May 27. Click on the button above to find Mass times at a parish near you. This feast celebrates the nature of God, that he is three persons in one: Father, Son and the Holy Spirit.

"Above all guard for me this great deposit of faith for which I live and fight, which I want to take with me as a companion, and which makes me bear all evils and despise all pleasures: I mean the profession of faith in the Father and the Son and the Holy Spirit. I entrust it to you today. By it I am soon going to plunge you into water and raise you up from it. I give it to you as the companion and patron of your whole life." — St. Gregory of Nazianzus

The Catechism of the Catholic Church tells us that the Trinity is the central mystery of the Christian faith. "It is the mystery of God in himself." (no. 234) God has revealed himself to us as Father, Son and Holy Spirit. He is three persons in one God. The Church's teaching focuses on the following: 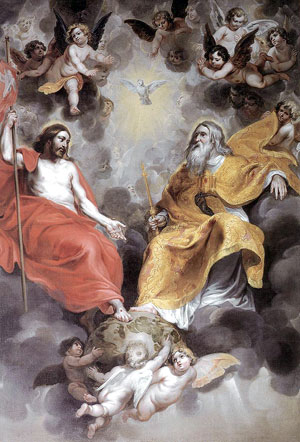 The Trinity is One — "We do not confess three Gods, but one God in three persons ... The divine persons do not share the one divinity among themselves but each of them is God whole and entire ..." (no. 253)

The Three Persons of the Trinity are Distinct from One Another — "It is the Father who generates, the Son who is begotten, and the Holy Spirit who proceeds." (no. 254)

The Three Persons of the Trinity are Relative to Each Other — "Because it does not divide the divine unity, the real distinction of the persons from one another resides solely in the relationships which relate them to one another ..." (no. 255)

This may sound overwhelming and difficult to understand because it is. It is impossible to fully understand this mystery. However, we are to try because God reveals himself this way. In the Gospel of John, we see Jesus revealing his Trinitarian nature to his disciples.

Again, the reality of the Trinity can never be fully explained, but we do have examples in our human experience that can help us see various aspects of this mystery. For example, in "The Holy Family, the Holy Trinity, and You", Gretchen Filz explains the similarities between the Trinity and the family and how love is the core of both. "When we reflect on the nature of the holy Trinity, we see that the human family itself teaches us about God. The Trinity is a loving, self-giving unity of three divine persons — God the Father, God the Son, and God the Holy Spirit — in one divine being. Their loving union is procreative, in that the holy Trinity brought creatures into existence to share in their divine love for all eternity.

"The Trinity is a loving, self-giving unity of three divine persons — God the Father, God the Son, and God the Holy Spirit — in one divine being. Their loving union is procreative, in that the holy Trinity brought creatures into existence to share in their divine love for all eternity."

"Likewise, a husband and wife join in a loving, self-giving, procreative union. Therefore it is not merely individual man and woman that bear the image of God, but also the human family itself, because together they form a union of love from which proceeds the fruitfulness of children. For this reason Pope Benedict XVI called the human family an icon of the holy Trinity ... When a man and wife desire to create children to share in their love, it is something like the desire of the holy Trinity to create you and me." To read more, visit Getfed.

Busted Halo offers this analogy to the Trinity. "Think of the different states of matter: solid, liquid and gas. Ice can become water and water can become steam. All of these are the same essence and contain equal amounts of hydrogen and oxygen but they appear in different forms. ... God is three 'persons' but one 'essence.' The Father is just as much 'God' as the Son and neither are 'more God' than the Spirit." This comparison falls short, however, because while it is the same essence, it cannot be all three forms at the same time.

God the Father — First person of the Trinity, the creator from whom everything flows and has being. "While the Son and the Holy Spirit are not “lesser gods” they do proceed from the Father as God’s own self-gift to humanity."

God the Son — Second person of the Trinity, Jesus himself. He is God who became man. "God becomes like us and dies our human death for us. But because Jesus is God, he cannot be held by death and rises to a new life, supremely better than human experience."

God the Holy Spirit — Third person of the Trinity. He proceeds from both the Father and the Son. "The Spirit is God’s real presence living within all of us, which brings us inspiration (which literally means 'to draw in the Spirit')."

To further explore this mystery, read "Immersed in the Trinity and what it implies" from Word on Fire or watch the videos below.