Bishop Anthony B. Taylor will celebrate Palm Sunday Mass at the Cathedral of St. Andrew in Little Rock at 12:05 p.m. Sunday, April 14. To find a Palm Sunday Mass in your area, click on the button above to find Mass times at a parish near you.

Palm Sunday is celebrated the Sunday before Easter and marks the beginning of Holy Week. We begin this feast by reenacting the events of Jesus' triumphant entry into Jerusalem. We put ourselves there, with all those who had gathered to celebrate the Passover feast. We see Jesus approaching the city, riding on a colt, and get excited because we have heard the stories about the miracles he has performed. We wave our palm branches and cry out: "'Hosanna!'" "'Blessed is the king who comes in the name of the Lord.'" "'Hosanna in the highest!'" (Luke 19: 28-40 and Mark 11:1-10) 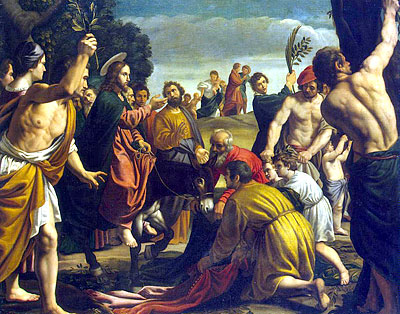 But that is not all we reenact on this day. Palm Sunday is also called Passion Sunday and the reason becomes evident as the tone of the Mass radically changes with the reading of Christ's passion and death as the Gospel for the day. Becoming part of the angry mob, we go from welcoming Jesus as a king to condemning him as a criminal shouting: "Crucify him! Crucify him!"

In a homily about these events, St. Bernard of Clairvaux (1090-1153) offers this perspective. "What a contrast between the green branches and the cross, between the flowers and the thorns! Before they were offering their own clothes for him to walk upon, and so soon afterwards they are stripping him of his, and casting lots upon them."

Even those closest to Jesus abandoned him. All his apostles, except for John, fled in fear. When asked, Peter denied even knowing Jesus, not once, but three times. What are we to make of this? Why do we put ourselves in the shoes of the people who were there?

Bishop Anthony B. Taylor helps us see why this is important in his 2018 Palm Sunday homily. "How about us? What do we do when faithfulness to Jesus becomes difficult? If we change the subject when the truth becomes awkward, then aren't we even more cowardly than Peter? At least he was trying to avoid arrest; all we risk is a little unpleasantness."

"When we make fun of others we are part of that crowd that made fun of Jesus. When we crown people with thorny reminders of past sins and personal defects, we press that same crown of thorns into the scalp of their savior and ours too. Jesus prayed for his persecutors; that's us he prayed for. Whenever we call for the execution of a criminal, we are among those who shouted: 'Crucify him, crucify him!' Jesus was innocent and the good thief could have been rehabilitated and things haven't changed much in 2,000 years."

Symbolism of the Palms

Palms were used in Jewish tradition to celebrate triumph or victory. For Christians, the palm branch became a symbol of martyrdom. Even the words used to praise Jesus as he entered Jerusalem have deeper meaning. The Catechism of the Catholic Church explains that the word "hosanna" means "save" or "give salvation." 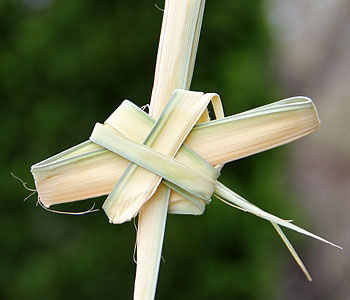 This term along with the acclamation, "blessed is he who comes in the name of the Lord," is used during the Sanctus (Holy, Holy) of every Mass. It concludes the preface to the eucharistic prayer "that introduces the memorial of the Lord's Passover. (no. 559)

The blessed palm frond that everyone receives at this Mass is a sacramental to take home. Traditionally Catholics keep their palms near or behind a crucifix, on a prayer altar or with their Bible. Keeping the palm serves as a reminder to remember Jesus' passion and follow in his footsteps to carry the crosses in our own lives. Catholics are asked to bring their palms back a year later to be burned so the ashes can be used on Ash Wednesday to begin Lent anew.

For those who don't return their palms to be burned for Ash Wednesday and want to dispose of them properly, the same rule applies as with any blessed object. They should never be disposed of in the trash. The proper way is by burning or burial. With blessed palms, it would be appropriate to bury them in a flower garden at your home. From medieval times, people have believed that blessed palms formed into the shape of a cross would protect them from danger. To learn more, see the symbolism of palms in the ancient world or learn how to make a palm cross.