Bishop Anthony B. Taylor concelebrated a special liturgy Jan. 4 to remember Pope Emeritus Benedict XVI at San Fernando Cathedral in San Antonio. Archbishop Gustavo García-Siller, MSpS, of the Archdiocese of San Antonio, was the presider at the memorial Mass, with concelebrants comprised of the bishops of Texas, Oklahoma and Arkansas, who were meeting in San Antonio for their annual retreat, according to Arkansas Catholic. 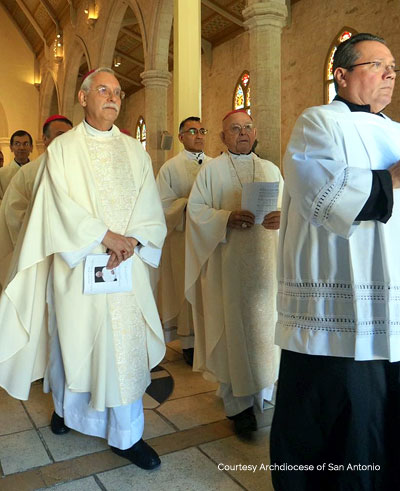 The prelates are members of Region X, one of 14 geographic regions in which the archdioceses and dioceses are divided for purposes of United States Conference of Catholic Bishops proceedings. The bishops of Region X meet in early January each year at Oblate School of Theology for a spiritual retreat and business sessions.

"God's faithful people, gathered here, now accompany and entrust to him the life of the one who was their pastor," Pope Francis said during his homily at Pope Benedict's funeral. "Together, we want to say, 'Father, into your hands we commend his spirit.'" Learn more about the funeral. "Benedict, faithful friend of the Bridegroom, may your joy be complete as you hear his voice, now and forever!" he concluded, as the crowd prayed in silence.

Then-Cardinal Joseph Ratzinger became Pope Benedict XVI in 2005 following the death of Pope John Paul II. He resigned on Feb. 28, 2013. Arkansans reflected on Pope Benedict's influence on their spiritual lives in the Jan. 14 issue of Arkansas Catholic. Some met the late pope before and during his papacy, while others reflected on his role as theologian.