Saints of Advent are models for holiness

The lives of the saints inspire us, especially when we are struggling to find our way. The saints whose feast days we celebrate in Advent are no exception. In fact, it is during this season that we discover the real Santa Claus, a missionary priest, doctor of the Church, visionary, bishop, pope, martyr and a couple of Marian feasts that both teach and inspire. The list below features saint feast days during Advent with additional information and traditions associated with each saint. Visit the USCCB website to find daily Mass readings and video reflections. You might also like our resources for an Advent calendar.

We celebrate the feast of St. Andrew, the apostle on Nov. 30. He is the first saint to be celebrated during Advent, which is the fitting since he was the first of the Twelve Apostles to be called by Jesus. Advent is a season of joy and anticipation for the coming of the Lord. St. Andrew's example of this in evident in the Scriptures. Learn more from his biography or consider praying the St. Andrew Christmas Novena beginning today. 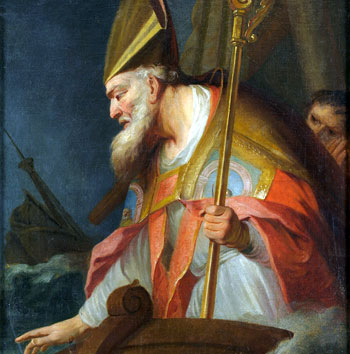 Known as the apostle to the Indies and to Japan, Francis was born in Spanish Navarre, the youngest in a large family. He studied at the University of Paris, where he met St. Ignatius of Loyola, and was among the first seven Jesuits who vowed to be spiritual soldiers for Christ. Francis is the patron saint of missionaries, Borneo, the East Indies, India, Pakistan, Japan and Outer Mongolia. Learn more from Saint of the Day or read "St. Francis Xavier: A missionary to Asia"

John was born in Damascus, Syria. He succeeded his father as chief representative of the Christian community to the caliph in Damascus, then under Islamic rule. He was forced to resign in 719 because of his faith. He entered a monastery in the mountain wilderness between Jerusalem and the Dead Sea, and lived there until his death. Pope Leo XIII declared him a doctor of the Church in 1890. Learn more from Saint of the Day or the U.S. bishops.

St. Nicholas was a fourth-century bishop of Myra, a city in what is now Turkey. According to Teaching Catholic Kids, he was born in the year 270 A.D. to wealthy parents who died during an epidemic when he was very young. He was raised by his uncle, also named Nicholas and a Catholic bishop. This uncle eventually ordained his nephew a priest. Read Saint of the Day or CNS Saint to learn more, or learn about St. Nicholas Day traditions.

Ambrose was practicing law in Rome when the emperor appointed him governor of the province whose capital was Milan. When that church see became vacant, Ambrose was chosen bishop by acclamation. A catechumen like many of his people, Ambrose was baptized, ordained and consecrated bishop on the same day, Dec. 7, 374. One of the four doctors of the Latin Church, Ambrose also baptized St. Augustine of Hippo and is the patron of bees, stonemasons and catechumens. Learn more from Saint of the Day or the U.S. bishops.

Although we celebrate the Immaculate Conception during Advent, the season during which we prepare for the birth of Jesus, this feast is NOT about the conception of Jesus. The Immaculate Conception refers to the conception of Mary, the mother of Jesus. The "immaculate" is not a reference to how she was conceived by her parents, Sts. Joachim and Anne. It acknowledges that God intervened and allowed her to be conceived without the stain of original sin. It is a holy day of obligation to attend Mass. For holy day Mass times, please contact a parish directly to get its Mass schedule. For more information, see the International Marian Research Institute, Saint of the Day or the U.S. bishops.

Mary appeared to Juan Diego near Mexico City in 1531. She asked for a shrine to be built there. But the bishop asked for a sign. Mary told Juan Diego to pick roses blooming atop the hill and put them in his cloak. When Juan opened his cloak for the bishop, the roses fell out and the image of Our Lady of Guadalupe adorned his cloak. Juan lived out his days as a hermit near the first chapel built there; he was canonized in 2002. Learn more from Saint of the Day or the U.S. bishops.

The Blessed Virgin Mary appeared as an Aztec princess to Juan Diego near Mexico City in 1531. She asked for a shrine to be built but the local bishop asked for proof and she instructed Juan Diego to pick roses blooming atop the hill and put them in his clock. When he opened his cloak, the fresh roses fell to the ground and miraculously revealed an imprint of Our Lady's image on his tilma (cloak). Miraculously, the 489-year-old tilma that held Our Lady of Guadalupe's image remains to this day. Learn more from Saint of the Day, International Marian Research Institute or the U.S. bishops.

This virgin martyr is believed to have died for her faith in the year 304 in Sicily, during the persecutions of Roman Emperor Diocletian, who ruled from 284-305. Not much is known for certain about St. Lucy, but she is among the few female saints listed in the canon of the Mass. St. Lucy’s name is derived from the Latin word for “light,” and her feast is a major celebration in Sweden. Learn more from Saint of the Day, Simply Catholic, Catholic Icing, Catholic Culture or the U.S. bishops. 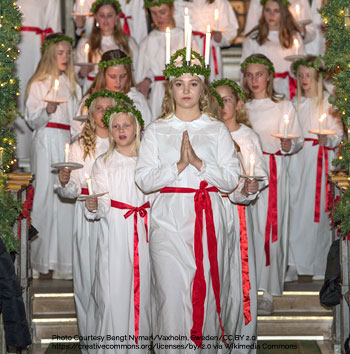 Born Juan de Yepes de Alvarez in Spain, John of the Cross entered the Carmelite monastery in 1563. The Dark Night of the Soul is his most famous work. Only after his death was he recognized as co-founder of the Discalced Carmelites. He is the patron saint of mystics and poets. Learn more from Saint of the Day or the U.S. bishops.

This doctor of the Church was born in Holland and studied canon law in Belgium before turning to the study of theology in Germany. In 1543, he entered the Society of Jesus and soon became a well-known preacher. He wrote three catechisms in German and is credited with keeping the southern German peoples Catholic. Learn more from Saint of the Day or the U.S. bishops.

Greatly revered in his native Poland, this saint, also known as John Cantius, spent most of his life teaching at the University of Krakow, where he was a noted professor of sacred Scripture. A personal austerity contributed to his reputation for holiness: He ate no meat and slept on the floor. Learn more from Saint of the Day or the U.S. bishops.