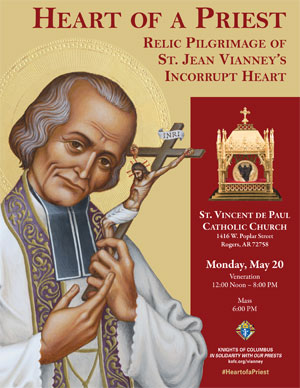 The heart of St. John Vianney, the patron saint of parish priests, will be venerated at St. Vincent de Paul Church in Rogers from noon to 8 p.m., Monday, May 20. Mass will be celebrated at 6 p.m. The relic has been touring the U.S. since November. The Shrine of Ars in France has entrusted to the Knights of Columbus the major relic of the incorrupt heart for a national tour from through early June. The event in Rogers is the only stop in Arkansas. Twenty-two Arkansans participated in Arkansas Catholic’s pilgrimage to France in April and stopped in Ars for a tour of where the famous priest served for 40 years. Father T.J. Hart celebrated Mass for the group in the chapel before his incorrupt body. The 12th century church where he preached contains several items, including the chalice, monstrance and confessional, used by the priest. For questions, please email vianney@kofc.org.