Transfiguration is foretaste of kingdom

"You were transfigured on the mountain, and your disciples, as much as they were capable of it, beheld your glory, O Christ our God, so that when they should see you crucified they would understand that your passion was voluntary, and proclaim to the world that you truly are the splendor of the Father." (Byzantine Liturgy, Feast of the Transfiguration, Kontakion)

Jesus asked his disciples, “Who do people say that I am?” And Peter answered: “You are the Messiah.” Soon after Jesus began preparing his disciples for what was to come. "He began to teach them that the Son of Man must suffer greatly and be rejected by the elders, the chief priests, and the scribes, and be killed, and rise after three days." (Mark 8:31) Peter then pulled Jesus aside and rebuked him. In reply Jesus said: “Get behind me, Satan. You are thinking not as God does, but as human beings do.” (33)

Six days later, Jesus took Peter, James, and his brother John, and led them up Mount Tabor and he was transfigured before their eyes confirming what had been revealed to Peter about Jesus and what Jesus was telling them would come.

"His clothes became dazzling white, such as no fuller on earth could bleach them. Then Elijah appeared to them along with Moses, and they were conversing with Jesus. Then Peter said to Jesus in reply, 'Rabbi, it is good that we are here! Let us make three tents: one for you, one for Moses, and one for Elijah.' He hardly knew what to say, they were so terrified. Then a cloud came, casting a shadow over them; then from the cloud came a voice, 'This is my beloved Son. Listen to him.' Suddenly, looking around, they no longer saw anyone but Jesus alone with them." (Mark 9:2-8) 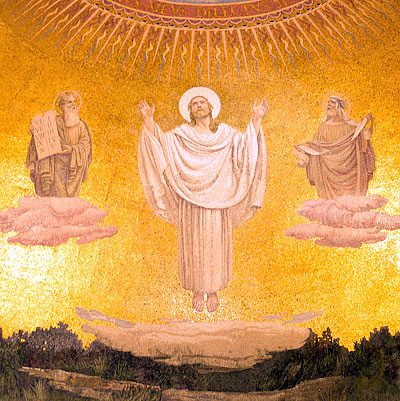 We recall and celebrate the feast of the Transfiguration of the Lord on Aug. 6. The Catechism of the Catholic Church points out that "the whole Trinity appeared: the Father in the voice; the Son in the man; the Spirit in the shining cloud." (no. 55)

The catechism goes on to explain why this event was so important: "On the threshold of the public life: the baptism; on the threshold of the Passover: the transfiguration. Jesus' baptism proclaimed 'the mystery of the first regeneration,' namely, our baptism; the transfiguration 'is the sacrament of the second regeneration:' our own resurrection. From now on we share in the Lord's resurrection through the Spirit who acts in the sacraments of the body of Christ. The transfiguration gives us a foretaste of Christ's glorious coming, when he 'will change our lowly body to be like his glorious body.' But it also recalls that 'it is through many persecutions that we must enter the kingdom of God.' (no. 556)

Bishop Anthony B. Taylor echoed this in a 2018 homily addressed to seminarians. "That is the basic message of Jesus' transfiguration for us: The only road that leads to glory passes through Calvary. This is true for both Jesus and all of his followers, the apostles and now us ... If you are not willing to bear a cross, you’re not yet following Jesus."

Both Word on Fire and Simply Catholic (Our Sunday Visitor) draw attention to the fact that God reveals himself on mountaintops. "Moses and Elijah are the key representa­tives of the Law and the prophets. Their coming to talk with Jesus shows him to be the fulfillment of God’s revelation to them."

Father Billy Swan explained how the transfiguration reveals what awaits followers of Christ in Word on Fire. "On the top of Mount Tabor, it became clear to Peter, James, and John who Jesus truly was: 'God from God” and “Light from Light,' as the Nicene Creed tells us. This light shone out from his humanity and concrete existence. God’s light shone through him and not apart from him. This point is crucial as we understand our lives in Christ. God’s grace and light shine through our humanity and make it radiant in transfiguration. Our faith in Christ is not an obstruction to living a fully human life; it is the source of living a fully human life."

"In the early Church, St. Basil declared that the Holy Spirit shines on believers and 'illuminates them like the sun' ("On the Holy Spirit," 26.61). For St. Irenaeus, the light of Christ that shines on us both penetrates us and enfolds us: 'The light of the Father passes into the flesh of Christ; and from Christ it shines forth upon us, so that each of us is enfolded' ("Against Heresies," 4.20.2)," he wrote.

"The implications of this are immense. It means that when we encounter God in prayer and participate in the liturgy, we are absorbed into his light and become luminous with it. Like Moses, this illumination happens whether we are aware of it or not. ... This is what it means to be holy. Holiness is to take on the nature of Christ and to become luminous with his grace. That is why many representations of the saints in sacred art display them with a halo around their heads and bodies. At the transfiguration, Jesus’ radiance with the light of heaven entices us and excites us with the prospect of our own transfiguration in him," Father Swan concluded.