Catholic parishes across Arkansas welcomed 665 new Catholics into the Church during Easter Vigil Masses March 26. They participated in their parish's Rite of Christian Initiation of Adults process. Those who had never been baptized received all three sacraments of initiation — baptism, confirmation and Eucharist. Those who had been baptized in another Christian church made their profession of faith in the Catholic Church, were confirmed and received their first Communion. The list of all who entered the Church in Arkansas can be found in the March 26 issue of Arkansas Catholic. 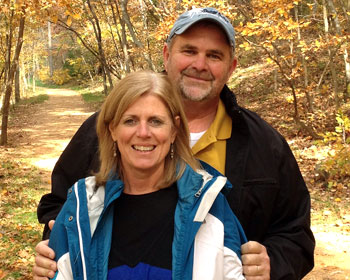 A few of the "neophytes" or "newly planted" shared why they became Catholic with Arkansas Catholic. Karen and Mark Latch knew after their first Mass that "This is for me." And it was the influence of a Catholic aunt and close friends who showed "compassion toward others" along with their son's attendance at Catholic High School that led them to visiting a Catholic church in the first place.

They made their profession of faith, were confirmed and received their first Communion at the Cathedral of St. Andrew in Little Rock. "We know we’re at the right place. I think our kids were a little surprised (we have three grown kids), but they were supportive. We’re thrilled about it," said Mark Latch.

Bishop Anthony B. Taylor received Mark and Karen Latch along with others into the Church when he celebrated the Easter Vigil at the Cathedral. In addition to addressing those preparing to enter the Church, his homily applied to all who strive to live for God. Read his homily.

"We are still weak and vulnerable, it is true. But Satan has been defeated and the power of sin and death has been broken. So take courage, there is no longer any insurmountable obstacle standing in the way of you living fully for God and doing his will with all your heart," the bishop said. "Jesus has set us free and enabled us to face our fears and bear our own crosses courageously so as to then wear a crown, sharing fully ourselves in the fruits of Jesus’ victory!"

For more information, read other testimonials from our new Catholics in Arkansas, visit the U.S. Conference of Catholic Bishops to learn about new Catholics nationwide or read Pope Francis' homily from the Easter Vigil Mass at St Peter’s Basilica in Rome where he baptized 12 people from Italy, Albania, Cameroon, Korea, India and China.