Frank Head, former director of the Catholic Immigration Services in Springdale, retired on June 30, 2019. In the column below, which was originally published in Catholic Charities Connections, a special section of Arkansas Catholic, Head reflects on his 20 years of helping to provide low-cost legal services to immigrants. Until a new director for the Springdale office has been hired, Jennifer Verkamp-Ruthven will serve as interim director. This will be in addition to her current job of overseeing the Little Rock office for Catholic Immigration Services.

"Some things happen in life that appear to be random but later seem to have been inevitable. Twenty years ago, I answered an ad by Catholic Charities Immigration Services in Springdale and, in August 1999, I was hired to run the place. Twenty years later, three of the four women in that office are still there, providing low-cost legal services to immigrants. 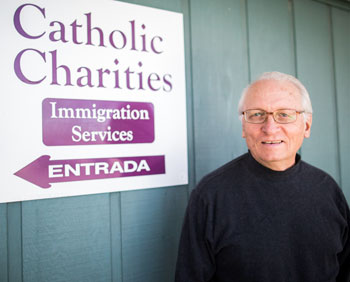 "Four more joined them over the years to wield an amazing combination of intellect, compassion, humor and humility with a single purpose: living Jesus’ commandment to love thy neighbor as thyself. The eight core crew are now assisted by volunteers, contract workers and pro-bono attorneys to offer an unparalleled service to God. In Arkansas, thousands of immigrants from all over the world — men, women and children — live as our neighbors, yet are deprived of the rights, protections and privileges we ourselves take for granted.

"The founding fathers of America established a constitutional principle that a stable democracy could only be established if the laws applied equally to all. Historically, many laws in early America protected only men and exclusively white men at that. But eventually in the American great experiment, principle prevailed over personal greed and equality under the law took root. Women and blacks were given the right to vote and the Supreme Court ruled that non-citizens were entitled to the same protections as citizens. Again the idea is that if one of us is enslaved, none can be free

"In the 1990s, this upstart bunch of Catholic women in Springdale took it upon themselves to read immigration law, study obscure departmental memos and spend hundreds of hours applying their learning to help their immigrant neighbors complete the obscure governmental forms that might eventually let those families live out their lives without the threat of jail and deportation. Immigration law has a special provision allowing trained non-lawyers to provide representation. Two decades later, by 2019, these seven women had so impressed individuals, attorneys, judges and federal agencies that our office receives almost $250,000 annually in financial support.

"Each of those women averages four appointments a day, 1,000 neighbors a year, 20,000 good deeds in two decades by listening to one family at a time and recommending legal solutions. Back in 1999, Catholic Charities Immigration office was in the second floor of the historic St. Raphael Church in Springdale. There were five of us and we had priests, nuns and Franciscan brothers working nearby. We attended daily Mass, adoration chapel and benefited from many more aspects of Catholic’ religious life. As the years went by, we outgrew the space and moved down the street.

"Personal demands on everyone’s lives increased: from ailing spouses and parents to growing children with schedules. Our numbers and our outreach expanded through collaborations with other non-profits to all parts of Arkansas, which meant we were rarely all following the same routine at the same time. But for me, those two decades will always be God’s gift to me: a Catholic home place to serve and a work family to do it with."