Click on the button above to find Mass times at a parish near you. Historically known by its Latin name, Corpus Christi, this feast day highlights the Real Presence of Jesus in the Eucharist, — Body, Blood, Soul and Divinity. The word "Eucharist" means "thanksgiving." It comes from the Greek "eucharistein" and "eulogein," which "recalls the Jewish blessings that proclaim — especially during a meal — God's works: creation, redemption and sanctification." (Catechism of the Catholic Church, no. 1328)

On the night before he died, Jesus shared one last meal with his Apostles. During this Last Supper, "he took the bread, said the blessing, broke it, and gave it to them, saying, 'This is my body, which will be given for you; do this in memory of me.' And likewise the cup after they had eaten, saying, 'This cup is the new covenant in my blood, which will be shed for you.'" (Luke 22:19-20) 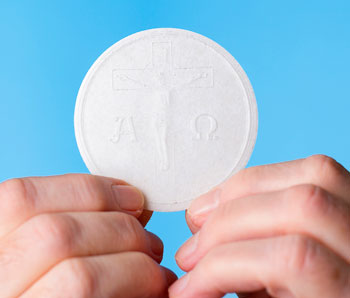 Through the Apostles' successors, the Catholic Church has been following Jesus' command to "do this in memory of me" for more than 2,000 years. "In order to leave them a pledge of (his) love, in order never to depart from his own and to make them sharers in his Passover, (Jesus) instituted the Eucharist as the memorial of his death and resurrection, and commanded his Apostles to celebrate it until his return; 'thereby he constituted them priests of the New Testament.'" (Catechism of the Catholic Church, no. 1337)

Taking him at his word when he said, "This is my body," and "This is my blood," the Church teaches that the bread and wine become the body and blood of Jesus at every Mass. St. John Chrysostom declared: "'It is not man that causes the things offered to become the body and blood of Christ, but he who was crucified for us, Christ himself. The priest, in the role of Christ, pronounces these words, but their power and grace are God's. This is my body, he says. This word transforms the things offered.'" (catechism, no. 1375)

Though Christ is present in many ways in his Church, his presence in the Eucharist is unique. He "makes himself wholly and entirely present" in the bread and wine. Therefore, the Eucharist is the "source and summit of the Christian life." (no. 1324)

"The Church and the world have a great need for eucharistic worship. Jesus awaits us in this sacrament of love. Let us not refuse the time to go to meet him in adoration, in contemplation full of faith, and open to making amends for the serious offenses and crimes of the world. Let our adoration never cease." — St. John Paul II, "Dominicae Cenae," no. 3

Because of its importance, the Church has a special feast day to recognize the presence of Jesus in the Eucharist. The Solemnity of the Most Holy Body and Blood of Christ, traditionally called "Corpus Christi," (Latin for "Body of Christ,") traces its origins back to Pope Urban IV who declared the universal celebration of this feast day in 1264.

He asked papal theologian St. Thomas Aquinas to compose new liturgical texts for the feast. His "'Adoro te Devote,' remains an essential part of the Church’s sacred hymnography. The 'Pange Lingua,' for example, is often sung during the eucharistic procession after the evening Mass of the Lord’s Supper on Holy Thursday, to which the last two stanzas are referred separately as 'Tantum Ergo' and sung at benediction of the Blessed Sacrament." To learn more, read Our Sunday Visitor.

In addition to celebrating Mass, many parishes celebrate this feast with a tradition that goes all the way back to when it was instituted: the eucharistic procession. "Often splendid and regal, the practice was encouraged by the Council of Trent so as to reiterate the Church’s belief in the real presence of the Blessed Sacrament. The medieval eucharistic processions on Corpus Christi were grand and stately affairs, involving entire towns and cities." Learn more.

These days parishes have processions of the Eucharist in and around the church or through city streets. Other parishes offer additional holy hours, eucharistic adoration with benediction of the Blessed Sacrament or a Litany of the Most Precious Blood. Contact a parish near you to learn its plans to celebrate this feast day. Or, if you don't already participate in adoration in your parish, we invite you to do so. Many parishes offer eucharistic adoration year-round. See  Eucharistic Adoration Times in Arkansas to find an adoration chapel near you.