"This past week the bishops of the United States met in Baltimore for our semi-annual general assembly. This year the meeting was focused principally on the current clergy sexual abuse crisis in the wake of the scandals surrounding ex-Cardinal Theodore McCarrick, the report of the Pennsylvania Grand Jury, and the allegations of Archbishop Viganò. 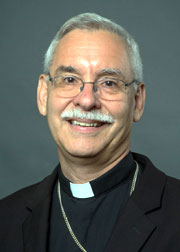 In preparation for this meeting, various committees of the USCCB produced documents for our consideration:

"In addition, we were provided a document proposing reporting mechanisms for claims of violations of these standards of accountability. I had studied these documents prior to the meeting and was prepared to support them with my vote, but at the very beginning of the meeting we were informed that the Vatican asked that we not put these up for a vote prior to a two-day meeting this coming February of all of the heads of the conferences of bishops worldwide in order to ensure a unified global approach to this problem.

"We were, of course, very disappointed with this turn of events because we all feel a great urgency to solve this problem as quickly and decisively as possible. Things tend to move more slowly in Rome than we would prefer and clearly a two-day meeting could only be a first step when addressing a problem of this magnitude.

"But in practical terms, the Vatican’s request that we delay voting on the specific proposals we had before us ended up having some positive effects, making it evident to me that amid all this darkness, the Holy Spirit is active in the Church. Indeed, by the end of our four-day meeting, I realized that this delay was, in fact, providential.

"What happened is that we discussed these and other proposals as planned, we just didn’t take a vote … and this led to a much more wide-ranging discussion than might have been likely otherwise. Instead of focusing on whether to approve these specific proposals or not, we focused more on listening to each other.

"Out of this came a discussion that gradually surfaced flaws in the proposals that had not occurred to me or most of the others present, for instance the changes in canon law that Rome would have to make for us to proceed with these proposals and the unexpectedly high cost of the special commission — $500,000 in the first year of operations alone.

"Also we took a look at the procedures already in place. Complaints about a bishop are to be directed to the archbishop of the province; complaints about the archbishop are to be directed to the senior bishop of the province. Obviously this was not followed in the case of Archbishop McCarrick. We discussed shifting this responsibility from the archbishop or senior bishop to the review board of the archdiocese or of the diocese of the senior bishop, but of course this would again require major changes to canon law and some had serious doubts about whether that would really work.

"Other matters surfaced in our wide-ranging discussion: strong support for Pope Francis despite our disappointment at this delay; the issue of homosexuality and the impact of the sexual revolution, especially during the decades when the vast majority of the crimes against minors were committed; the fact that the safe environment policies in place since 2002 nationwide have been extremely effective in protecting children and youth these last 16 years; the need to keep victims and their needs foremost in our considerations, and so on.

"We talked about clericalism and Pope Francis’ identification of that as a major factor and which I’ll bet will be a likely topic addressed in the retreat for bishops this January that I unfortunately will not be able to attend.

"What I saw happening over these four days was a growing consensus among the bishops that was evident without anyone having to take a vote on specific proposals, which in the end we all realized were inadequate — at least in their present form — as well as some of the alternative proposals that emerged as our discussion proceeded.

"In the language of Rome, the proposals were not yet 'ripe.' We were dealing with matters that were far more complex than they seemed at first and all of us bishops have a great desire to 'get it right.'

"In the meantime, there is much that can be done on the local level, and that is where I and my brother bishops will be most focusing our attention. But I can assure you that we bishops are committed to three goals articulated by the USCCB President Cardinal Daniel Di Nardo:

"We left the meeting without having taken decisive action — yet — in order to do so in communion with the universal Church, which will make the whole global Church stronger and holier, including the American Church.

"As the Papal Nuncio Archbishop Christophe Pierre reminded us at the beginning of our meeting, 'if the Church is to reform herself and her structures, then the reform must spring from her mission of making known Christ, the Son of the Living God.' And I can assure you that we bishops left the meeting committed to the holiness and mission of the Church. There is much yet to be done, but it is clear that we are at moving forward together with renewed commitment and hope."