Feast of Our Lady of Guadalupe

Location: Feast falls on Third Sunday of Advent this year

The image imprinted on the tilma of St. Juan Diego reveals part of the message Mary came to give the people of Mexico. Click on the button above to learn the meaning behind the image of Our Lady of Guadalupe. 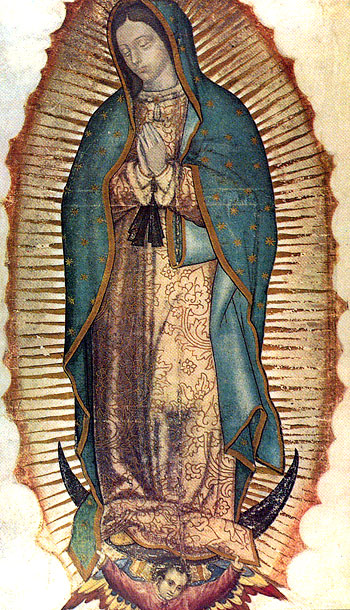 Normally celebrated on Dec. 12, the feast of Our Lady of Guadalupe falls on the Third Sunday of Advent this year.

In December 1531, the Blessed Virgin Mary appeared as an Aztec princess to Juan Diego on the hill of Tepeyac, outside a small village near Mexico City. The poor, humble man, who was declared a saint in 2002, told his bishop about the visits from the Virgin of Guadalupe and her desire for a church to be built on the site where she appeared. The bishop asked for a sign to prove that Juan Diego was telling the truth.

When Juan Diego asked Mary to provide this proof, she told him to gather the roses growing on the hillside. Even though roses are rare in December, he was able to fill his cloak with them. When he returned to the bishop, he opened his cloak the fresh roses fell to the ground and miraculously revealed an imprint of Our Lady’s image on his tilma (cloak).

Miraculously, the 488-year-old tilma that held Our Lady of Guadalupe's image remains to this day. According to the International Marian Research Institute, it has survived 17th-century floods in Mexico City and was undamaged by a bomb explosion. The colors have not faded over time and the cactus cloth remains intact although such material typically lasts fewer than 20 years. Rich with symbolism, the image itself reveals part of the message Our Lady came to give the people of Mexico.