Call To Donate Via Credit Card

St. Nicholas Partners is an annual appeal to raise money for the following ministries of Catholic Charities of Arkansas, all of which provide services to the most poor and vulnerable among us: Catholic Adoption Services; Catholic Immigration Services in Little Rock and Springdale; prison ministry; refugee resettlement; Westside Free Medical Clinic; family assistance; and disaster response. Last year’s appeal raised more than $13,000.

Q. How is this different from other fundraisers?

A. It’s different in two ways. First, “partners” (donors) may designate which Catholic Charities’ program(s) they want their contribution to support. There is also an option to give where the funds are most needed. Second, because the appeal occurs right before Christmas, a donation on behalf of a friend or family member makes a perfect gift. If making a donation in honor of a loved one, please mail your donation before Dec. 15 using this donation form and mail to: St. Nicholas Partners, Catholic Charities of Arkansas, P.O. Box 7239, Little Rock, AR 72217-7239. Just indicate on the donation form who the gift is for, and we will send them an acknowledgment of your gift. 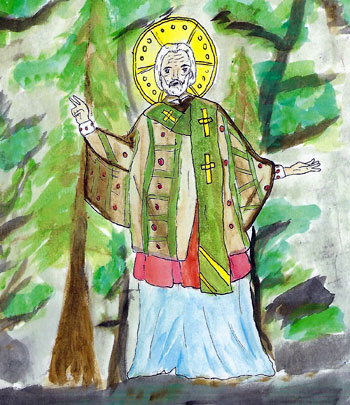 A. Each year, a new card depicting St. Nicholas is specially designed and created for the appeal. These beautiful cards are Catholic Charities’ Christmas greeting to you, and an invitation to become a partner by supporting the ministry of your choice.

The artwork for this year's card was chosen from an art contest for students in Arkansas’ Catholic schools. Cash prizes are awarded for the three best designs and are given to the artist and to the school the young artist attends. The artwork was judged by Catholic Charities of Arkansas staff.

Q. Anything else I should know?

A. According to Poverty USA, the number of people living in poverty in the United States was 45.6 million in 2017. That was 14.6 percent of the total population. The following statistics reveal the level of poverty in Arkansas:

Among those living in poverty are wage earners who have lost jobs, seniors who can’t afford medicine and families living on minimum wage. These are our friends and neighbors. Many who receive assistance from Catholic Charities of Arkansas find the holiday season particularly painful. Please help us continue to help them by supporting St. Nicholas Partners this year. For more information, contact Megan Moore, office administrator of Catholic Charities of Arkansas at (501) 664-0340, ext. 379.