The Catechism of the Catholic Church tells us that angels are pure, spiritual beings who have been present since creation to glorify God without ceasing and serve as messengers of his saving plan for humanity. In addition, "from its beginning until death, human life is surrounded by their watchful care and intercession." (nos. 330-350)

Angel, which comes from the Latin "angelus" and the Greek "angelos," is a "messenger, envoy; one that announces." Archangels are one of the nine choirs of angels listed in the Bible. The hierarchy of angels ranked from lowest to highest fall into the following classes: 1.) angels, 2.) archangels, 3.) principalities, 4.) powers, 5.) virtues, 6.) dominations, 7.) thrones, 8.) cherubim; and 9.) seraphim.

We celebrate the feast of Sts. Michael, Gabriel and Raphael, archangels on Sept. 29. They are the only angels mentioned by name in the Bible. St. Michael is the only one described as an archangel, but Sacred Tradition and the liturgy of the Church attribute the same title to Sts. Gabriel and Raphael.

St. Michael — His name, derived from “Mikha'el,” is Hebrew for "who is like God." He is known as the "prince of the heavenly host." He is pictured as a warrior, dressed in armor, wearing sandals and often holding a sword standing over the defeated devil. He is mentioned four times in the Bible, twice in the Book of Daniel and once in the Letter of St. Jude and Book of Revelation. 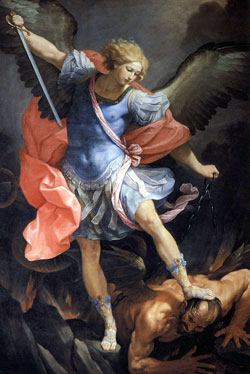 He is most known for the reference in Revelation where he leads an army of angels against Lucifer and other fallen angels in the battle of heaven. He and his army win and the devil and his followers are thrown out of heaven. He is the patron against evil, temptations, for endangered children, the dying, emergency response workers, soldiers, law enforcement officers and many others.

The feast devoted to Sts. Michael, Gabriel and Raphael is also known as Michaelmas (pronounced mick-el-mess), according to Arkansas Catholic. "Several food-related customs surround the feast day, including eating blackberries by Michelmas. The legend says that when St. Michael threw Satan out of heaven, he landed on a blackberry bush that he cursed. People traditionally pick and eat blackberries by Michelmas or they will be too bitter."

One of the most famous Catholic prayers, the Prayer to St. Michael, (below) was written by Pope Leo XIII in 1886. Tradition holds that the holy father composed this prayer after receiving a vision of Satan and his followers "that laid bare the depth of evil in its purest form." Several Arkansas parishes say this prayer at the conclusion of Mass.

Prayer to St. Michael, the Archangel

St. Michael the Archangel, defend us in battle, be our protection against the wickedness and snares of the devil. May God rebuke him we humbly pray; and do thou, O Prince of the Heavenly host, by the power of God, cast into hell Satan and all evil spirits who wander through the world seeking the ruin of souls. Amen. 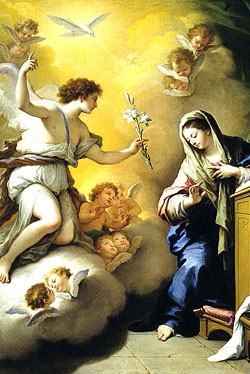 St. Gabriel — His name comes from Hebrew and means "God is my strength." St. Gabriel appears three times in Scripture as a messenger for God, all related to his plan for salvation.

First he appears to Daniel to explain a vision the prophet had about the coming messiah. Then he came to Zechariah to foretell the birth of his son, St. John the Baptist and finally, and most famously, he was the messenger of the annunciation.

He appeared to the Virgin Mary proclaiming: “Do not be afraid, Mary, for you have found favor with God. Behold, you will conceive in your womb and bear a son, and you shall name him Jesus."

He is the patron of childbirth, clergy, professional communicators, diplomats and others. His symbols include the lily, trumpet, lantern, scepter or olive branch.

St. Raphael — His name comes from Hebrew and means "God heals." He is only mentioned in the Book of Tobit, where he eventually heals Tobit of his blindness and takes care of his son, Tobias, for whom he binds the demon that had plagued Sarah, allowing Tobias to safely marry her and have a child with her. 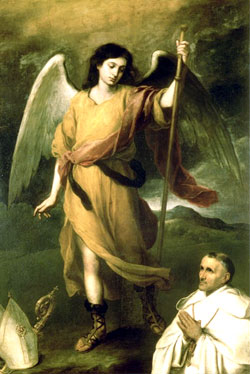 He is the patron of the blind, medical professionals, counselors, shepherds, travelers and others. He is usually shown with a staff, walking with Tobias.

The Holy Father summed up the roles of these archangels in his reflection on their feast day: “Michael defends us, Gabriel gives us the Good News and Raphael takes us by the hand and walks with us; he helps us with the many things that occur along the journey." We must ask Raphael to help “us not to be tempted to take the wrong step; to take the wrong path ... Guide us along the right path; you are our traveling companion as you were (once) the traveling companion of Tobias." (Pope Francis, daily meditation, Sept. 29, 2017)

Word on Fire noted that celebrating these famous archangels, the army of God, serves as a sober reminder that their opponent is very real. "C.S. Lewis often alludes to the idea that if we ever truly saw evil — in its unabashed ugliness — we would be so completely reviled and repulsed that we would never choose it. Instead, however, the master of deceit convinces us, as he convinced Eve in that primeval garden, that his choice is the better, more desirable, even more beautiful one. He sneakily rides on God’s coattails, and our lukewarm desire to have our apple and eat it, too, allows the ugliness of evil to remain in costume … a harmless, anthropomorphic snake, a 'red man with a pitchfork and goatlike horns,' a creeping, relativistic morality that allows the individual to reign supreme with his/her claim to the ultimate 'knowledge of good and evil.'" Read more.

Therefore, it is always helpful to ask for intercession whenever we are tempted to turn away from God.

“Let us invoke them in prayer so that in every moment they remind us of the presence of God, and support us in the struggle against evil and guide us safely along the roads of our lives. We entrust to them ourselves, our dear ones, and those we hold in our hearts. Praise be to Jesus Christ.” — Pope Francis, feast of Sts. Michael, Gabriel and Raphael, archangels, Sept. 29, 2016