We may be reaching the end of the greatest liturgical season of the liturgical year, but several holy days at the end of Easter Time and into Ordinary Time prove these months are anything but ordinary. Seven special holy days, known as solemnities, take place through the end of June. These include: Ascension of the Lord, Pentecost Sunday, the Most Holy Trinity; Most Holy Body and Blood of Christ; Sacred Heart of Jesus; Nativity of St. John the Baptist; and Sts. Peter and Paul, Apostles. 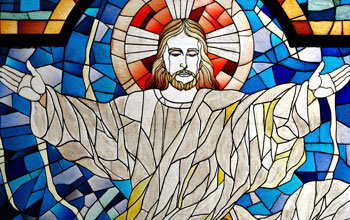 A solemnity honors events, beliefs and people of great importance in our salvation history through Jesus Christ. It holds the highest rank among celebrations on the liturgical calendar. Some are fixed, which means they always fall on the same date, like Christmas, but others are moveable, which means their dates are based on the date of Easter.

Of the solemnities mentioned here only the Nativity of St. John the Baptist and Sts. Peter and Paul, Apostles are fixed. The others are moveable, so their dates change each year.

Besides solemnities, many lesser holy days, known as feasts and memorials are celebrated throughout the liturgical year. They help us remember saints who serve as models for Christian life.

Ascension of the Lord 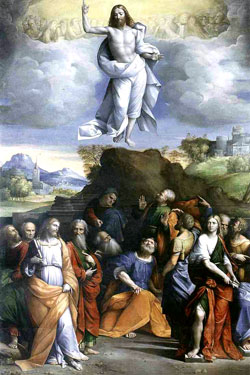 The Ascension of the Lord celebrates Jesus' ascension into heaven and his coming into glory at the right hand of the Father. It occurred 40 days after his resurrection from the dead. This year, Ascension Thursday is May 5. However, in most Catholic provinces and dioceses in the United States, including the Diocese of Little Rock, this feast will be celebrated Sunday, May 8.

"The lifting up of Jesus on the cross signifies and announces his lifting up by his ascension into heaven, and indeed begins it. Jesus Christ, the one priest of the new and eternal covenant, 'entered, not into a sanctuary made by human hands ... but into heaven itself, now to appear in the presence of God on our behalf.'

"There Christ permanently exercises his priesthood, for he 'always lives to make intercession' for 'those who draw near to God through him'. As 'high priest of the good things to come' he is the center and the principal actor of the liturgy that honors the Father in heaven." (Catechism of the Catholic Church, no. 662)

It was Christ's ascension that made Pentecost possible. "It is better for you that I go. For if I do not go, the Advocate will not come to you," Jesus told his disciples. (John 16:7) But he promised: "I am with you always, until the end of the age." (Matthew 28:20)

Pentecost concludes the Easter Season, which leads into Ordinary Time. It is considered the birthday of the Church, for it was on this day, that the Holy Spirit descended upon the Apostles and filled them with the gifts they needed to lead the Church. This event took place 10 days after Jesus ascended into heaven and promised the coming of the Advocate. This year, Pentecost Sunday is celebrated May 15. 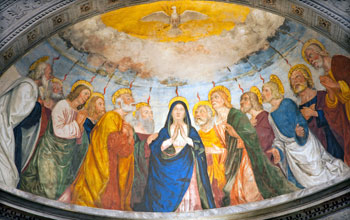 "When the time for Pentecost was fulfilled, they were all in one place together. And suddenly there came from the sky a noise like a strong driving wind, and it filled the entire house in which they were. Then there appeared to them tongues as of fire, which parted and came to rest on each one of them. And they were all filled with the Holy Spirit and began to speak in different tongues, as the Spirit enabled them to proclaim." (Acts 2:1-4)

According to the Catechism of the Catholic Church, Pentecost instituted the "age of the Church, during which Christ manifests, makes present, and communicates his work of salvation through the liturgy of his Church, 'until he comes.'

"In this age of the Church, Christ now lives and acts in and with his Church, in a new way appropriate to this new age. He acts through the sacraments in what the common Tradition of the East and the West calls 'the sacramental economy;' this is the communication (or 'dispensation) of the fruits of Christ's paschal mystery in the celebration of the Church's 'sacramental' liturgy." (no. 1076). 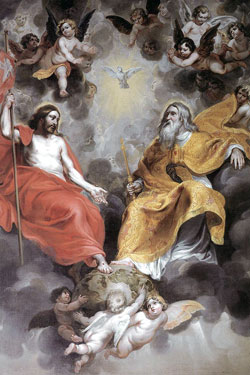 This year, the Most Holy Trinity is celebrated Sunday, May 22. It highlights our Triune God; three Persons in one: the Father, the Son and the Holy Spirit.

"The mystery of the Most Holy Trinity is the central mystery of Christian faith and life. It is the mystery of God in himself. It is therefore the source of all the other mysteries of faith, the light that enlightens them. It is the most fundamental and essential teaching in the 'hierarchy of the truths of faith'. The whole history of salvation is identical with the history of the way and the means by which the one true God, Father, Son and Holy Spirit, reveals himself to men 'and reconciles and unites with himself those who turn away from sin.'" (Catechism of the Catholic Church, no. 234)

Most Holy Body and Blood of Christ

This year, the Most Holy Body and Blood of Christ is celebrated Sunday, May 29. Also known as Corpus Christi, this feast day honors the Real Presence of Jesus in the Eucharist, which is the "source and summit of the Christian life." (Catechism of the Catholic Church, no. 1324) 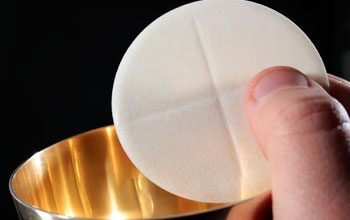 He "makes himself wholly and entirely present" in the bread and wine. This raises "the Eucharist above all the sacraments as 'the perfection of the spiritual life and the end to which all the sacraments tend.'" (catechism, nos. 1373-74)

Celebrating this feast day may include processions of the Eucharist in and around the church or through city streets. Many parishes also have eucharistic adoration with benediction of the Blessed Sacrament or Litany of the Most Precious Blood. Contact a parish near you to learn its plans to celebrate this feast day. 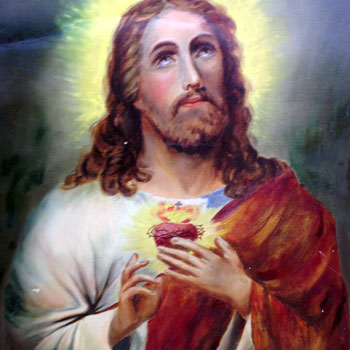 It is always celebrated after the octave of Corpus Christi or 19 days after Pentecost Sunday. The Sacred Heart of Jesus represents his divine love for humanity, demonstrated most tangibly by the sacrifice of his life for our sins.

"Jesus knew and loved us each and all during his life, his agony and his passion, and gave himself up for each one of us: 'The Son of God ... loved me and gave himself for me.' He has loved us all with a human heart. For this reason, the Sacred Heart of Jesus, pierced by our sins and for our salvation, 'is quite rightly considered the chief sign and symbol of that ... love with which the divine Redeemer continually loves the eternal Father and all human beings' without exception." (Catechism of the Catholic Church, no. 478)

Devotion to the Sacred Heart of Jesus grew after the apparitions of Jesus to St. Margaret Mary Alacoque, which included instructions on a novena and promises from Jesus for those who honor his heart. Special prayers of consecration, meditation and litanies offer ways to celebrate this devotion.

Nativity of St. John the Baptist 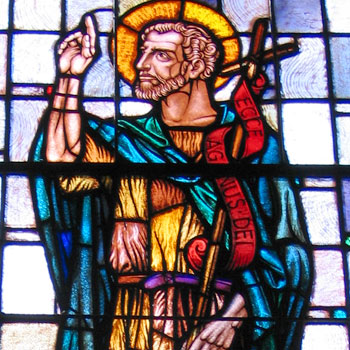 This year, the Nativity of St. John the Baptist is celebrated Friday, June 24. It is not a holy day of obligation. From the moment of conception, a relationship was established between Jesus and John.

An angel appeared to an elderly Zechariah and told him his wife, Elizabeth, who had been unable to have children, would give birth to a son to be named John. "He will be filled with the Holy Spirit even from his mother’s womb, and he will turn many of the children of Israel to the Lord their God." (Luke 1:5-25)

The angel's predictions began to come true only a few months later when Mary visited her cousin, Elizabeth. After receiving a similar visit from the Angel Gabriel who had explained that the Holy Spirit would come upon her and she would conceive a Son to be named Jesus, Mary went to assist Elizabeth already in her sixth month of pregnancy.

Upon hearing Mary's greeting, John leaped in his mother's womb, announcing the coming of the Lord. "And how does this happen to me, that the mother of my Lord should come to me? For at the moment the sound of your greeting reached my ears, the infant in my womb leaped for joy," Elizabeth said. (Luke 1:43-44)

As an adult, John became a prophet who devoted his life to preparing the way for Jesus. He told those who followed him: "I am baptizing you with water, for repentance, but the one who is coming after me is mightier than I. I am not worthy to carry his sandals. He will baptize you with the holy Spirit and fire." (Matthew 3:11-12) 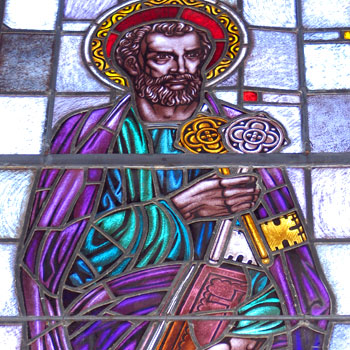 This year, Sts. Peter and Paul, Apostles is celebrated Wednesday, June 29. It is not a holy day of obligation. The tradition of honoring these saints on the same day goes back to the early Church.

“Both apostles share the same feast day, for these two were one; and even though they suffered on different days, they were as one. Peter went first and Paul followed. And so we celebrate this day made holy for us by the apostles’ blood. Let us embrace what they believed, their life, their labors, their sufferings, their preaching and their confession of faith.” — St. Augustine of Hippo in 395 A.D.

According to tradition, St. Peter felt he was not worthy to die in the same manner as Jesus, so the Romans crucified him upside down with his head pointed downward.

The small, inverted crosses in the Diocese of Little Rock crest pay tribute to the manner of his martyrdom. 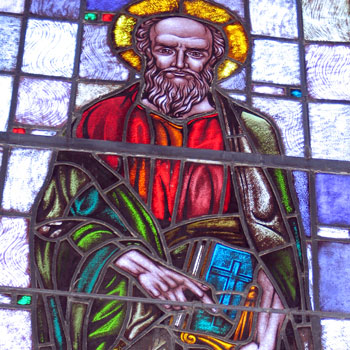 Jesus chose Peter to lead his Church. "And so I say to you, you are Peter, and upon this rock I will build my church, and the gates of the netherworld shall not prevail against it. I will give you the keys to the kingdom of heaven. Whatever you bind on earth shall be bound in heaven; and whatever you loose on earth shall be loosed in heaven.” (Matthew 16:18-19)

Unlike St. Peter, St. Paul only became a follower of Jesus after his death and resurrection. In fact, he persecuted Christians until he encountered Jesus on the road to Damascus. His conversion was life-changing. He became known as the Apostle to the Gentiles and devoted the rest of his life to spreading the Gospel of Christ.

"For I am already being poured out like a libation, and the time of my departure is at hand. I have competed well; I have finished the race; I have kept the faith. From now on the crown of righteousness awaits me, which the Lord, the just judge, will award to me on that day, and not only to me, but to all who have longed for his appearance." (2 Timothy 4:6-8) Since Paul was a Roman citizen, he was beheaded by Roman authorities.