First thanksgiving began with the Mass

Catholic parishes across the Diocese of Little Rock celebrate Mass on Thanksgiving Day. To find out when Mass will be celebrated on Thanksgiving in your area, contact a parish near you to find Mass times.

Thanksgiving, as an American holiday, traces its roots back to 1621 when Gov. Bradford of the Plymouth colony called for a day of public praise and prayer to celebrate the first harvest. But the very first thanksgiving on American soil took place much earlier; 56 years earlier to be exact, and the highlight of the occasion was a Catholic Mass.

The first thing Spanish settlers did when they arrived safely in St. Augustine, Fla. was celebrate Mass in thanksgiving to God on Sept. 8, 1565. "After the Mass, Father Francisco Lopez, the chaplain of the Spanish ships and the first pastor of St. Augustine, stipulated that the natives from the Timucua tribe be fed along with the Spanish settlers, including Don Pedro Menendez de Aviles, the leader of the expedition. It was the very first Thanksgiving and the first Thanksgiving meal in the United States," wrote historian Dr. Michael Gannon. 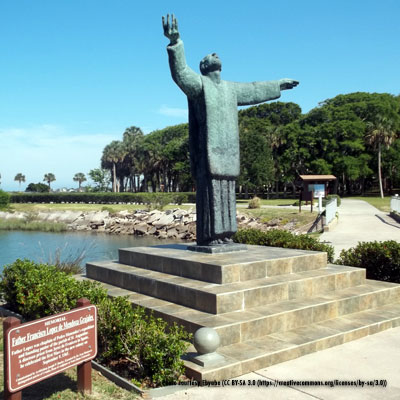 The Mission Nombre de Dios was established on the site, which included the first Catholic parish, now the Cathedral Basilica of St. Augustine. The image at the top of this page is a photo illustration of a mural inside the Cathedral that depicts this event. The artist, Hugo Ohlms, painted the mural in 1965 as part of a major renovation of the Cathedral in celebration of its 400th anniversary. (The image was provided by and is being used with the permission of the Cathedral.)

A similar event was held on April 30, 1598 in Texas "when Don Juan de Oñate declared a day of thanksgiving to be commemorated by the holy sacrifice of the Mass," according to the Catholic Education Resource Center.

It makes sense that the first thanksgiving began with the Mass because the very word, "Eucharist," literally means "thanksgiving" in the original Greek. Bishop Anthony B. Taylor explained that "in the Eucharist, Jesus gives us the food of the New World," in his 2016 Thanksgiving homily.

"This new food saves us far more effectively than the turkey, sweet potatoes, pumpkins and cranberries ... It is bread from heaven, the bread of eternal life, which we receive and for which we literally give thanks in every Eucharist," he add.

If you haven't already, we invite you to make Mass on Thanksgiving part of your holiday tradition. "Giving God thanks is at the heart of what we do whenever we go to Mass, so there’s no more appropriate way to incorporate thanks into your day than to start by giving thanks at the table of the Lord," according to Teaching Catholic Kids, making Mass its first suggestion in its "12 Thanksgiving Prayer Ideas." To find out when Mass will be celebrated on Thanksgiving in your area, contact a parish near you to find Mass times.

To learn more about connecting the Catholic faith with the Thanksgiving holiday, see "The Origins of Thanksgiving" or read the book "Eucharist," by Bishop Robert Barron. Visit Franciscan Media or Busted Halo to see options for Thanksgiving prayers or related saints.

The following Thanksgiving Day Prayer was taken from the Catholic Household Blessings and Prayers from the U.S. Conference of Catholic Bishop.

Lord, we thank you
for the goodness of our people
and for the spirit of justice
that fills this nation.
We thank you for the beauty and fullness of the
land and the challenge of the cities.

We thank you for our work and our rest,
for one another, and for our homes.
We thank you, Lord:
accept our thanksgiving on this day.
We pray and give thanks through Jesus Christ our Lord. Amen.