Listen to Podcast on Baptism

Click on the button above to access this podcast from Bishop Robert Barron who explains the sacrament of baptism. In it he says that baptism defines our relationship with Christ. We are reborn as part of his mystical body and gifted with the grace of God’s love. Baptism lays the foundation for every other sacrament we are to receive and permanently links us to the holy Trinity.

“(Jesus) comes to sanctify the Jordan for our sake ... to begin a new creation through the Spirit and water.” — St. Gregory Nazianzen, Liturgy of the Hours, I, 634

The Baptism of the Lord concludes the celebration of the Christmas season. This feast celebrates that, before starting his public ministry, Jesus allowed himself to be baptized by St. John the Baptist.

The United States Catholic Catechism for Adults explains why Jesus, who was totally faithful to the Father's will and free of sin, would choose baptism. "Jesus’ immersion in the water is a sign for all human beings of the need to die to themselves to do God’s will. ... He wanted to show his solidarity with human beings in order to reconcile them to the Father. By commanding his disciples to baptize all nations, he established the means by which people would die to sin — original and actual — and begin to live a new life with God." (pp. 184) 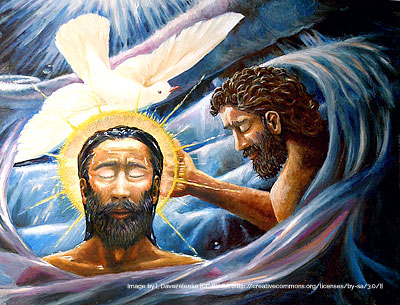 Gretchen Filz with the Catholic blog, GetFed, said baptism was foreshadowed in the Old Testament when the Israelites passed through the Red Sea with the goal of entering the Promised Land, illustrating how baptism is the gateway, the initiation into God's family with the goal of entering into enternal life with him in heaven. "With Jesus’ baptism he left behind for us a sign, so that by us imitating his baptism we will receive his own divine life."

"At baptism the original sinful nature we inherited (through original sin) drowns or dies, or is buried, and we are recreated through the sanctifying waters and given a new 'robe of incorruption.' It is a foretaste of our own resurrection at the end of time," she added. Immediately after Jesus was baptized, the Holy Spirit descended upon him in the form of a dove and a voice from heaven said: "You are my beloved Son; with you I am well pleased." (Luke 3:22)

Chris Mueller with Ascension points out that after Jesus' baptism everything changed. Before, he was viewed as a ordinary carpenter. "But, after the Jordan, his life was extraordinary. It was inexplicable. His own family members were baffled by him. People who knew him said things like: 'Isn’t this the carpenter’s son? Isn’t his mother’s name, Mary?' (Mark 3:21) Jesus, through it all, claimed, 'I have come down from heaven not to do my will but to do the will of him who sent me.' (John 6:38)  It seems that, at the Jordan, the Holy Spirit began to lead Christ in a new way. Christ, having given up the divine prerogative, made himself reliant on the Spirit, and went forth to do the Father’s will."

Jesus modeled the new life we are called to live after our baptism. "We should never forget that Jesus lived his life, not as some unattainable goal, but as a template of how we are called to live," Mueller explained. Jesus' birth and his baptism were separated by 30 years, so it may seem odd to conclude Christmas with the feast of Christ's baptism. But Father Steve Grunow, with Word on Fire, explains the connection between these events.

He said there are three great revelations or "theophanies" in the Christmas season. The first is the incarnation, the fact that God allowed himself to be born in this world as a man. The second was at the epiphany when Jesus was revealed as the Messiah, the king of Israel. And the third was that when Jesus was baptized, the holy Trinity was revealed. "The Son makes himself known, the Father speaks, and the Holy Spirit descends. It is this mystery, the mystery of the Trinity, that brings the revelations or the theophanies of the holy season of Christmas to their fulfillment."