CCA has fewer and fewer refugees to assist

The following article was originally published in Catholic Charities Connections, a special section of Arkansas Catholic, on Nov. 24, 2018.

The Refugee Resettlement Office, a ministry of Catholic Charities of Arkansas, has been in the business of formally helping refugees since the 1970s. Over this time period, programs have become increasingly regulated by the U.S. Department of State, which manages resettlement efforts, and by the U.S. Department of Health and Human Services, which offers assistance to refugees after their first three months in the United States, as well as assistance to other similarly vulnerable populations.

The other vulnerable populations are asylees, victims of trafficking, SIVs (Special Immigrant Visas) — people who worked for the U.S. government or contractors in Afghanistan or Iraq — and Cuban parolees (any Cuban who arrived in the U.S. by land or water). 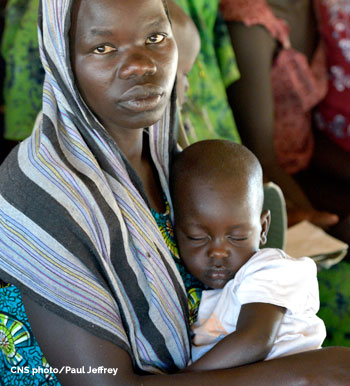 A woman waits with her child in an outreach clinic in the Rhino
Refugee Camp in Uganda May 3, 2017. Uganda was housing 1 million
refugees from South Sudan at the time.

The number of refugees resettled in the U.S. is governed by the president, who sets an annual ceiling and establishes rules regarding admission and resettlement. From 1990 to 1995, the U.S. received an average of 112,000 refugees, many of them from the former Union of Soviet Socialist Republics (USSR). Since 1995, both the ceiling and the actual number of refugees resettled have vacillated between 50,000 and 100,000 per year.

The marked exception was the administration of George W. Bush whose invasion of Iraq lead to destabilization, a shift of internal power dynamics and violence that forced millions of Sunni to flee Iraq. Meanwhile, President Bush dramatically reduced the number of refugees admitted to less than 30,000 in both 2002 and 2003 with approximately 40,000 admitted in 2006.

Refugees fared much better under the Obama administration with admissions returning to the 50,000 to 100,000 range, but on average, well under the 112,000 admitted from 1990 to 1995. Finally, with the Trump administration came a dramatic shift in refugee policy. Not only did President Trump slash the ceiling of possible admissions, but he instituted dramatic changes in rules governing the process of admission.

Some of the new rules were designed to limit the number of Muslim refugees. Other rules gummed up the admission process so that far less than the ceiling would actually arrive. For the fiscal year 2018 — from October 2017 to September 2018 — only 22,491 refugees entered the U.S.

The day-to-day work of helping refugees, once they land in the U.S., is done by a group of nine national organizations and the largest of these has historically been the U.S. Conference of Catholic Bishops. The Department of Migration and Refugee Services (MRS) oversees dozens of local refugee offices to ensure that resettlement is done in a consistent, fair manner in compliance with U.S. Department of State rules.

All agencies resettling less than 100 refugees are at risk of closure. In Arkansas, that includes both Catholic Charities of Arkansas and the new Lutheran agency, Canopy, operating in Fayetteville.

Due to the fluctuation in the number of refugees admitted from administration to administration, MRS and local resettlement agencies have attempted to build in some resilience. But things came to a boiling point with a new refugee crisis. By 2013, millions of Syrians were fleeing Bashar al-Assad’s brutal crackdown on a popular uprising for democracy during Arab Spring.

Only those Syrians processed through the United Nations were eligible for admission to the U.S. Under the best of circumstances, U.S. processing takes a minimum of two years. Only about 14,000 Syrians were admitted to the U.S. through fiscal year 2016. However, the Obama administration was ramping up capacity to resettle significantly more. It was this particular phenomenon — efforts to expand capacity and the sudden slamming of immigration doors — that has led to a collapse in refugee resettlement infrastructure.

All agencies resettling less than 100 refugees are at risk of closure. In Arkansas, that includes both Catholic Charities and the new Lutheran agency, Canopy, operating in Fayetteville. Because Catholic Charities provides ongoing services to refugees and other vulnerable populations after the initial resettlement period of three months, we have remained busy up to this date.

In addition to helping the last large wave of refugees, we have assisted a number of asylees from Africa, the Middle East and countries south of the Rio Grande. However, the current administration has also been doing everything possible to throttle the number asylees. The administration’s latest endeavor on this front came in early November, when President Trump issued new rules restricting access to asylum seekers.

Only those who cross into the U.S. through a port of entry will be able to seek asylum through the credible fear interview process. Texas has only two ports of entry on its 1,254 mile border: El Paso and Laredo.